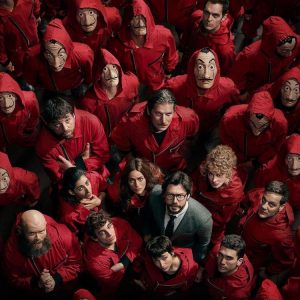 I’ve pulled out my Salvador Dali mask, the red jumpsuit and am chanting “Bella Ciao”. It’s finally time for Money Heist! Formally known as La Casa de Papel, the Netflix show releases its fourth season this weekend. The criminal-drama left season 3 on a huge cliffhanger. For those who’ve forgotten, here’s a quick recap: Nairobi was shot while Raquel was arrested. Professor declared war against the administration and his plan was falling apart. Several questions were left unanswered: Does Nairobi survive? Will Raquel throw Professor under the bus? What lies in Tokyo, Rio, Denver, Stokholm and everyone else’s fate?

Money Heist season 4 answers them all. Before I dive into the review, here are a few warnings: This review is based on the first five episodes of Money Heist season 4. There are possible spoilers. The new season’s first episode takes things off from season 3’s finale episode. The gang gets down to save Nairobi while Alicia Sierra gets down to breaking Raquel for Professor’s whereabouts. Meanwhile, Tokyo and Palermo are involved in a power fight as Nairobi lays on her death bed.

Professor manages to learn his ladylove’s location and successfully hacks into the investigation. In a drastic turn of events, the thieves find themselves in a spot as one of their biggest hostages escapes and start bringing the team to their knees. As I neared the mid-season episode, I noticed a pattern. The odd-numbered seasons laid the groundwork while the even seasons packed in the chaos. Like the second season, the fourth season doesn’t indulge in a lot of drama. Instead, the plot focuses on driving the viewers insane with action, twists and politics with utmost precision. Season 4 is high on politics and betrayals. The plot is unpredictable to a great extent. The show’s well-crafted screenplay leaves you doubting even the simplest of scenes. For example, Alicia confesses her heartbreaking backstory but for a moment you wonder if its a ploy. Turns out, she’s actually suffered a huge tragedy. The new season also serves a heavy dose of action. There are many scenes, especially in the fifth episode, where you are constantly on the edge of your seat. There are scenes that leave you jumping and screaming, either out of disgust, excitement or shock. The writing is still as crisp as in the first three seasons.

The new season stands at a higher risk of messing plotlines. It juggles stories of the original cast, the strings of the new ones and the timelines of those events that happened long before the Royal Mint of Spain heist. With so many parallels and newer plots developing, chances of the vision getting lost is always a worry. However, Money Heist manages to ride over that hurdle with ease.

Not only does Creator Álex Pina blends Berlin and his past rendezvous into the fourth season with ease, but Pina also intertwines several callbacks from the first and second season into the fourth season to propel the storyline. I could go on and on about the brilliant writing of the show. However, I refuse to indulge in it for I may give away some major spoilers. As for the performances, Álvaro Morte has proved he’s the best Professor around. In the new season, he reminds us of it again. But he takes a back seat to allow Úrsula Corberó aka Tokyo shine. Taking the lead during the heist and almost stealing the spotlight from Alba Flores (Nairobi) and Pedro Alonso (Berlin). There comes a point when Tokyo doubles up as Professor’s guardian angel. The moment goes to show how much her character has developed and how multi-faceted Úrsula is. Najwa Nimri (Alicia Sierra) is a treat to the eyes. However, Rodrigo De la Serna (Palermo) fell a little weak in the new season. Maybe he will manage to get my attention in the remaining episodes. A special mention to Enrique Arce (Arturo Román). Enrique elevates the disgust level to the next level in the fourth season. It takes efforts to inspire disgust and angst against a character. Money Heist subtly places brilliant music in every season. Be it Bella Ciao or Maria in the previous seasons. This season lives up to the tradition and adds yet another track to your playlist.

Final verdict: Does Money Heist season 4 live up to the expectation? A big yes. Does it deserve to be binge-watched? Hell yeah!