Free Shipping to UK, US & CANADA
Sale!
Rated 4.78 out of 5 based on 9 customer ratings
(9 customer reviews)

The Superman jacket is a positive shot actual replica’s of the Smallville red leather jacket which became worn by using Clark Kent inside the television series Smallville (2001 -2011). The lead act became performed through Tom Welling and he seems extraordinarily good looking on this Red jacket within the television series. The apparel offered right here is designed through some of the maximum innovative style designers of the modern generation and it’s far given to you with the similar features as inside the pure one. it’s far made to provide you the comfortable along side the sturdiness that’s important at some stage in the winters season. Smallville red leather jacket additionally capabilities a synthetic leather ‘S’ embossed over the chest together with padded detailing over the shoulders, which makes it seem unique from others leather jackets. furthermore, its alluring Red color is sharp sufficient to seize the eye of others even as you’re shifting round within the city! more about

Smallville  Clark Kent (born Kal-El) is a farmer who comes from the planet Krypton and lives in Smallville and works at Metropolis at the Daily Planet.

Son of Jor-El and Lara-El, Clark is sent to Earth by his parents to fulfill his destiny of which he would be the savior. It soars out of the planet a few seconds before its destruction. Accompanied by a massive meteorite shower, his spaceship landed in a cornfield in Kansas, where he was found and adopted by Jonathan and Martha Kent, who raised him as their son, and taught him to use his abilities.

Thanks to the yellow sun, Clark develops many Kryptonian skills that continue to grow as he grows up. He learns a lot about his origins thanks to Dr. Virgil Swann, who is a version of the artificial intelligence of his biological father Jor-El. In addition, Clark learns more about his people after helping an army of Kryptonian clones find a new planet.
Jacket Owner 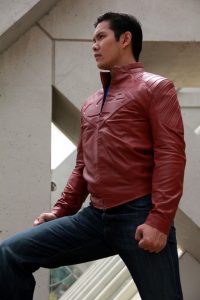